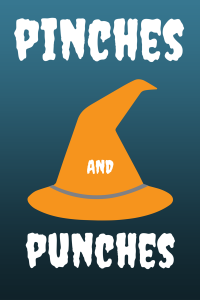 Do you remember the saying ‘A pinch and a punch for the first of the month’? I thought about it on Wednesday when we hit November, and I’m grateful the 1st of the month doesn’t mean a having a sore arm as it did when I was at school!

Apparently the saying goes back to the time when people thought witches existed. The pinch refers to a pinch of salt, which was thought to make witches become weak. Once the salt had done its job, all you needed to do was give them a good punch to banish them completely.

Anyway, back to the first of this month (with no witches). It was a Sunday, and for me it was a symbolic new beginning as well as an actual new month kicking off. I spent the day travelling to and from Wales, visiting a breeder with someone who is potentially ready to become a pet parent. We weren’t checking out Golden Retrievers, so I thought I’d be ok. And I was, most of the time. I spent two hours playing with, cuddling and walking four gorgeous dogs (two sets of potential parents). It took every last ounce of control not to add my name to the breeder waiting list for the new puppies though. I hadn’t realised how much I missed this particular type of company, and for a little while, the idea of a new puppy felt too exciting to walk away from.

But now is not the right time to make another twelve to sixteen year commitment. Simba is still the only dog I really want. Until my heart has learnt how to remember him without falling apart, and how to live with the joy of his memories rather than the sadness of his loss, it wouldn’t be fair to bring another dog into the equation. It hit me hard on the way home on Sunday evening – the stark physical ache of his loss. I will never hear his paws clattering on my floor, I will never smell his particular doggy stink, and I will never be able to wrap my arms around his furry neck and give him a cuddle again.

The absolute finality of his loss feels sharper at the moment precisely because of the contrast – because on Sunday I saw someone who was at the beginning of that particular adventure. It made me ache for what I had lost, even whilst I was excited for them and their new incredible journey.

But we can’t live in the past, can we?  And I’m not. I’m moving forward. After a few months of letting myself go, I’m finally taking a few small steps to a healthier lifestyle. I’m eating a little bit better (or rather, I’m not eating quite as much rubbish as I have been), and I’ve started finding ways to add back some of the exercise I’ve been missing out on the last couple of months. The new book is also slowly starting to develop and take shape. There have been days when my house feels more like a hotel, as I enjoy my new unwanted freedom. Ever so slowly, I’m adjusting to this new chapter in my story, and I won’t lie to you – there’s an element of excitement beginning to blossom too (I think Simba would have approved – I choose to take the two actual new buds appearing on ‘his plant’ as a sign that he does).

I don’t know what the future holds, and I’m starting to come to the realisation that I don’t need to know. I’m learning to accept that things change, to acknowledge I can’t control it, to trust that I can handle it and to hope that I will enjoy it. I’m learning to allow myself to go with the flow. Some days will be harder and some will be a breeze. Life moves inexorably forward whether we like it or not. We can never go back. So forward is our only option. Which means it’s not about the actual moving forward. It’s about how we move forward. Can we do it with style and aplomb and our heads held high? Or are we going to throw a tantrum, dig in our heels and fight a battle we’ll lose? I’m learning that fighting the flow is exhausting. I don’t want pinches or punches to get me moving. I’d rather just do it willingly, in my own way, on my own terms and preferably in a sparkly pair of shoes.