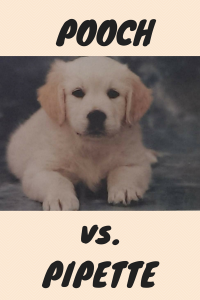 It’s been a funny few days – and by that I don’t mean odd or weird.  I mean laugh out loud funny.  And I’ve found that laughter in the oddest place of all – in my dog’s new medication routine.

He is also fourteen years old today.  So as a way of sharing his birthday with you, I’m going to share our adventures over the last couple of days – this is just a flavour of what life with my dog is like…

The first time we tried it, it all went ok, and I was mostly just relieved that he was eating again, as he’d completely gone off his food for a day or so.  Since then, there’s been an unexpected development.

A little battle has developed.  The dog has become sworn enemies with the pipette.  He doesn’t like have something a bit icky smelling (and probably icky tasting) being squirted down his throat. And it only took him two days to take against the pipette.  So I tried leaving the liquid in his food bowl, hoping he’d just lick it up.  Nope, no such luck.  I tried holding him with one hand and squirting with the other.  Not a good move – the result was a lot of mess and liquid everywhere except where it should be, and a slightly smug looking pooch.  So far, the score is Pipette 3 – Pooch 2.

Yesterday evening and this morning the Pipette and I became a little more devious.  I loaded it up, then hid it behind me, snuck up on him and whilst stroking his head with one hand and murmuring ‘Good boy’, snuck the other into position and squirted – success!  But at a cost.  Never have I seen him give me such a baleful disappointed stare.  “Not cool Mum, not cool.” his big brown eyes insinuated.

The thing is, this has all happened over the weekend, when I’ve had time to deal with it.  Tomorrow morning and a pre-work routine to add into the mix will make things…erm..interesting.  Luckily, if I do get a little bit stressed by it all, I came across an article which also made me laugh out loud, given our current situation.

It advised, rightly, that petting a dog is scientifically proven to reduce stress, in you and the dog. Ha!  I wonder if that still applies when your dog things you’re deceiving him so you can squirt horrible pipettes full of icky pink gunk at him?

It’s entirely possible that if it all goes awry tomorrow morning, you’ll find me hysterically trying to hug my suspicious and wary pooch, both of us covered in doggy Gaviscon, with the scoreboard reading Pipette 0 – Pooch 0.

It’s been an amazing fourteen years, full of lots of crazy adventures, learning, love and lots and lots and lots of laughter – and I’m looking forward to many more years of regaling anyone who’ll listen to tales of me and my dog.