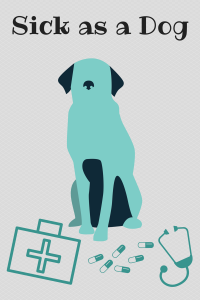 I realised something the other day.  As you know, my pooch has been very poorly for over six weeks now. Because of the illness he hasn’t been able to eat properly, he’s lost weight and his energy has dropped dramatically.

Here’s the realisation – through all of that trauma and difficulty he has remained the same silly, funny, sweet and ever hopeful little furball he always was, albeit he has been a little less greedy and a little more quiet sometimes.

I’ve noted below some of the ways he has been sick, that might help me and you, next time we’re a little (or a lot) under the weather:

Over the weekend we had three good days where the medication was kicking in, he wasn’t ill and there was lots of playing.  We’re having a couple of bad ones at the moment – but it’s in the mornings, and guess what?  In the evenings we still have a cuddle and he still wants to play with Monkey and investigate all movements in the kitchen.

So next time you’re ill, whether it’s a cold or something more serious, see if you can be sick as a dog.  It might just help you recover that little bit faster.