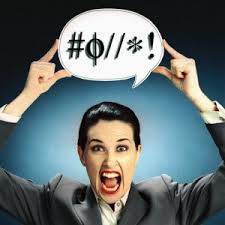 Let me paint you a picture…

I’m sitting with my boss at his desk and he’s talking me through the month-end process.  We’ve missed the deadline set by Group to report our numbers into them.  This is partly due to Group not having the reporting pack ready for us, partly due to my boss having to deal with a million other ‘Urgent, Must be Done Yesterday’ tasks, and partly due to the colossal ineptitude of some of the staff we work with causing us problems.  So things are going well, NOT.

I’ve been here just over a month, and I’m starting to get used to the casual and random swearing I hear in conversations all over the office.  I’m not a fan myself – I just don’t like hearing those words and I rarely use them.

But today, my boss had what I can only describe as a thunderously loud and severely prolonged swearathon.  It was so astounding that the rest of the office actually stopped what they were doing and looked genuinely shocked and awed at the same time.  (Group had sent an urgent email, copying in the world, his wife and his mother-in-law, pointing out we were late with our reporting and were holding them up).  I honestly thought he might be having a genuine apoplectic seizure for a minute.  But he was just letting off steam.  A lot of steam.  Enough to power a train from John O’Groats to Lands End apparently.

I completely get his frustration.  I mean seriously – it’s not like until this point we’ve been blissfully unaware of the date or the fact we’re late in delivering and have all been skiving – we’re busting a gut trying to get it all done.

But….I don’t like the swearing.  In fact, I would go as far as to say I hate the swearing.  And I know I’ve been spoilt, because most of the office environments I’ve worked in have had very few rude words.  I won’t be joining in – I can’t, it’s not part of my natural vocabulary and so it feels weird to me.

I guess what I find odd is that it’s the norm here and most people seem to do it without thinking.  I don’t know whether it’s normal to want to turn the air blue with your words – we do have air conditioners for that after all.  What do you think?  Is it normal?  Am I just making a big deal out of nothing, am I being Polly Prude?  Or do you agree with me – swearing in the workplace is just not cool dude?

Here’s something else to ponder in the whole ‘swearing in the workplace’ thing – according to a 2012 Career Builder survey 57% of employers questioned said they’d be less likely to employ someone who used profanity.  And 64% of employers would think less of an employee who repeatedly uses profanity.