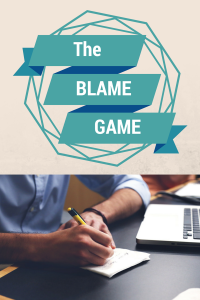 When I got back into the office after a week and a half away, my team were just finalising the quarterly reporting that I’ve been brought in to assist with.

I’d created a workbook that was designed to make our reporting more efficient and more transparent.  We’d tested it and everything was looking good.  But when we got to the actual reporting things did not go smoothly at all.

We lost a couple of days because of the May bank holidays, which weren’t recognised, so our deadline wasn’t extended.  There are a couple of other teams and departments we liaise with and one of the key players was away after running the initial report.  This wouldn’t have been a problem, except that the initial report was incorrect.  And finally, my team hadn’t used the workbook I’d designed in the way I had designed it, so not only did it take longer, but there were actually more initial errors.  Not good, right?

So when I came back on Monday, I was expecting a tough week, working through all the issues, and also playing the blame game.

You know how that goes. Something goes wrong.  No-one wants to take responsibility.  Everyone attempts to blame everyone else.  After much slinging of mud and ill-will, nothing is settled, everyone is unhappy and work becomes a little more miserable and Horroffice-esque.

So imagine my surprise when this week, when we sat down in our team to discuss everything, each of us genuinely accepted the part we played in the process.  For my part, I felt I needed to be clearer with the instructions and ensure the entire process was completed before letting anyone look at the date, but the manager I work admitted something I’d been nervous about raising – she stated that she’d gone in when the process and workbook were only half done and had started working on those numbers, and in retrospect she should have waited.  She wasn’t playing the blame game.  After the flood of relief on my part, we had some great insights from the experience which we know will improve things for the next quarter.

The same thing happened in our meetings with the other teams – no blame game being played anywhere, just a genuine desire to learn and make things better.  It’s something that I’ve only seen at a few companies.  In recent contracts the blame game seems to be the only one being played.

And you know what?  Just those open, honest, blame-free meetings made everything better.  That attitude, that “Ok, what can we learn from this, how can we re-engineer the process to improve it?” mindset, that made a huge difference.  No-one was on edge, worried that the blame game would land at their feet, and they would tagged.  Ideas flowed, and I’m genuinely excited to see how we improve the quarterly process.

So maybe we can all try that mindset on for size in the next few days – when something goes wrong, whether it’s at work or at home, tell yourself you’re not going to play the blame game (even when others do), you’re just going to ask what lessons you can learn instead, and see how much better you feel for it.