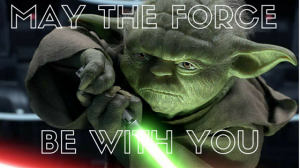 It’s impossible to avoid it, so I’m not even going to try. This week we will see one of the world’s biggest and most extravagant and most eagerly anticipated movie premieres of all time – Star Wars: The Force Awakens. And although there are a whole host of memorable characters in the franchise, the one that I love the most is the teeny tiny green Grand Jedi Master and all around most awesome creature in the known (and possibly unknown) universe – Yoda.

Did you know that Yoda was involved to some extent in the training of almost every Jedi? It’s true – Wikipedia says so! It would be rude to ignore such a galactic level of wisdom, so today, I thought we could remind ourselves of three of Yoda’s most famous quotes.  Here they are, in reverse order….

A pretty meaty one to kick-off with, isn’t it? It’s something we all find hard to do – we learn to hide our fears from our colleagues, our friends and family and especially from ourselves. We’re taught to ‘show no fear’. But I’ve learned that hiding away from my fears just makes them bigger and more fearsome. Facing them, even if it’s initially painful, is really the only way to start to banish them. Rock on Yoda!

Another cracking quote with some power-packed truth behind it. For a very long time, I didn’t believe I could be a writer. When people asked me what I was doing or wanted to do, I would always say I was an accountant and working towards becoming a writer. I don’t say that anymore. I tell people I’m a writer, with an accountancy background. I work as a finance contractor to pay the bills whilst I develop my writing. I also believe there’s a shiny sparkly day not too far away when I will be a full-time writer, living comfortably from my writerly (yes, it’s a word, honest!) earnings. The more I believe I’m a writer, the more the Universe is conspiring to make that true. What do you need to start believing for it to materialise?

I’ve saved the best for last. This is an absolute doozy. I spent at least ten years wishing I was a writer, telling everyone I wanted to be a writer and dreaming of becoming a writer. Do you want to know what my total literary efforts were in that entire decade? Three poems, one short story, and one very short children’s book (the first draft of which actually took me less than a week to pull together). Ten years, and not even 100,000 words.  So clearly, although I said I wanted it, I wasn’t actually doing anything about it. And what happened when I decided to ‘do’?  I decided in May 2014 to write Coping with the Horroffice. By February 2015 it was written, edited and up on Amazon. I’m almost at the end of the planning stage for my second book, fiction this time. I have notes on at least five other ideas for books (fiction and non-fiction) that I want to work on. Yoda was right – if you want something, there’s no space for half-hearted half-assed efforts. Go all in, and, as Yoda says…Do.

So there you go. Three monumental quotes and three mighty rules to live by. Let’s agree to put all three into place, awaken the force inside ourselves and see what a magnificent 2016 awaits us.

May the Force be with you.